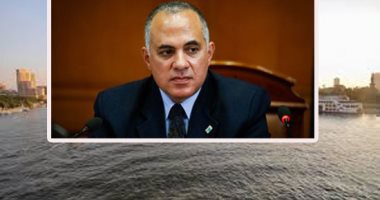 Dr. Mohamed Abdel Ati, Minister of Water and Irrigation Resources, received a report on work being carried out in Alexandria during 2019/2018, and the effects of implementing this work on improving the efficiency of river water networks and maintaining water installations and facilities and industrial works and protecting networks canals to allow them to absorb and are needed for irrigation especially during the summer, in addition to ensuring the arrival of water to the end, to provide and manage water requirements for various plants and flood complaints of parents and users ending tired canals and facing all forms of Adat on channels water and rationalize use at the national level.

Ibrahim Abdel Moneim, head of the Department of Water Resources and Irrigation in Alexandria, said that the central administration of water and irrigation resources in Alexandria carried out cleaning weed work, with a total cost of around 22.00 million pounds to improve irrigation conditions and ensure access of water to the end of the canal especially during maximum requirements.

He added that the Directorate General of Irrigation Nubaria had carried out iron work to improve the efficiency of the reservation gate, as well as preparing the Nubaria canal bridge for a total cost of around 7.5 million pounds, as well as the process of replacing and updating curtains on the left side with the Canal Canot of 2,900 water requirements from the end of the canal and improve conditions for irrigation management ranges.

Abdel Moneim pointed out that the General Administration for the withdrawal of victory had completed the consolidation of ATMs of commercial banks (5) at a cost of LE 4.5 million to absorb bank water.

The Deputy Minister at Alexandria said that the Victory Irrigation General Administration was implementing a channel level rehabilitation, renewal and modification project from 46,670 to 48,670 from Al-Librin and Al-Qaa (all sectors) at LE 3 million. The aim is to maintain the canal sector and improve the irrigation status of various plants in the channel As well as implementing the project package at the Directorate General for coastal protection which aims to preserve the coast from Alexandria Governorate with a total cost of up to 919 million pounds.

He stressed that the implementation of the annual maintenance project package and the repair, maintenance and operation of the intermediate mixing station and cleaning the trap of removal stations and weed removal in front of plant and plant networks and disinfection and weeds to improve the irrigation situation under the central administration in Alexandria and survey water users with total cost of 39 million pounds.