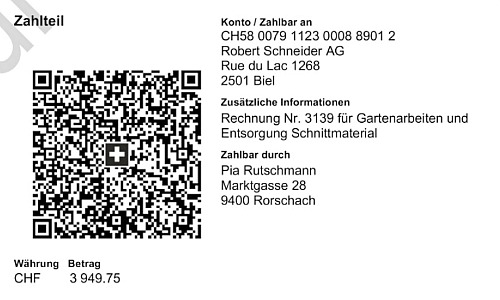 According to SIX, this is the largest financial infrastructure project for the past 30 years: Switzerland has switched to a new payment system, starting with banks migrating to SIC4 standards that are compatible with the European Union in 2017. Starting June 30, 2020, invoices with QR codes must be ready – conversion to a new payment slip is a true Hercules task of all efforts.

As the Financial Market Infrastructure Manager announced on Thursday, after the consultation process, it was decided to make changes to the payment slip pattern. This is not the first time. Very early in the planning of pure digital instruments ignored, because this is a user "does not make sense," at that time. Therefore, in early 2016, traditional slip payments with a modern QR code were proposed (see picture below) – soft renovation. But at the end of the same year, the project team must talk about books in the SIX environment. The "beetle", QR code, proved to be too small to store all the data needed. With the march stop needed for redesign, the introduction planned for mid-2018 will become garbage. With the pattern released on Thursday, SIX is now taking another step towards tradition – for example, back perforation. Other changes include receipt of receipts, simplified structured addresses and the possibility of combining structured references, ignoring the use of "final payment recipients" and the introduction of additional, license-free fonts for non-Microsoft users (see picture below). "The QR bill builds bridges between the digital and paper-based world and represents the intermediate step on the way from today's payment slip to Ebill," commented SIX on a good Swiss compromise.