A few months ago, the cartoon criminal authority was released from the detention center / GORDON 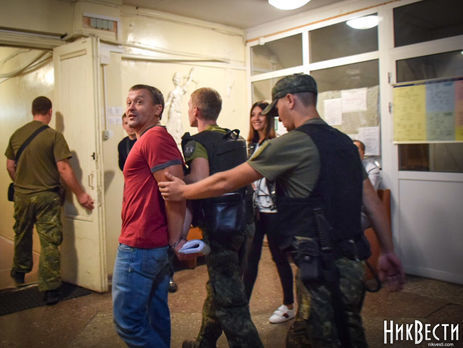 Journalist Dmitry Gnap published a photo showing a man who looked like the criminal authority Mikhail Titov, known as the Cartoon. According to Gnap, Titov was present at the speech of the head of the State of Nikolaev State Administration Alexey Savchenko.

The criminal authority of Mikhail Titov, known as the Cartoon, was released from SIZO. This was stated by journalist Dmitry Gnap on Facebook on November 17.

He published a photo depicting a man like Titov.

"[Фото] done a few weeks ago. On top of that, the cartoon criminal authority is free. In the company of friends, he listened to the speech of the head of the Nikolaev region [Алексея] Savchenko before the start of the tournament in martial arts. Really, a few months ago, the cartoon was taken out of the detention center, "Gnap wrote.

The international tournament in mixed martial arts in Nikolaev was held on October 27-28 2018.

On August 29, 2017, in Nikolaev, the Ukrainian Public Prosecutor's Office and Security Service arrested five people, including cartoons, on suspicion of creating a criminal organization that deprived people of their freedom during 2008-2017, threatened with murder, involved in extortion, raid, piracy and funds public.

Speaker of the public prosecutor Larisa Sargan stated that the cartoon was convicted of multiple murders and in fact controlled a number of politicians in the Nikolaev region.

On August 31, 2017, the Mariupol court arrested Titov for two months without the right to guarantee.

Ukraine's Attorney General Yuriy Lutsenko said that the cartoon had connections on many sides and in fact controlled the Nikolaev city council.